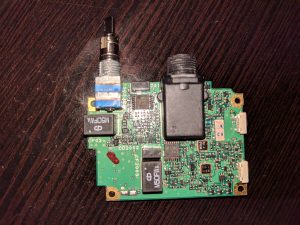 The spanner wrench finally came yesterday, and I successfully got the PCB out of the radio. Initially, melting the solder off the posts went fairly smoothly, though I had to max out my iron after all. Once I had the defective filters out, I had to ream out the holes because some solder was left behind, blocking them. It was at this point that I started having trouble.

The remaining solder just wasn’t melting, despite the iron being set as hot as it could go, and the built-in thermocouple was reading out the correct temperature. I eventually managed to get a couple of holes cleared out, but just could not get the others. I decided to go and buy some flux, hoping that it was just the oxides causing the difficulty. I managed to get a couple more holes opened up, but that was it. 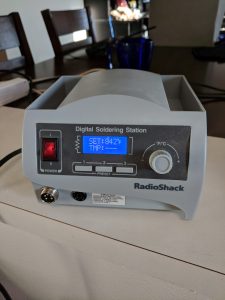 I started to suspect that maybe the soldering iron was the issue, so I carefully ran it under my nose to feel the heat. The main shaft was definitely hot, but I noticed a sharp decline in the heat as I got to the tip.  At this point, I decided to take a break, went to finish up my laundry, and then went to bed. This morning, I woke up and decided to go out and buy a new soldering iron. Preferably a well-known name brand, rather than a generic, store-branded one from RadioShack, which my soldering station was.

I came across the Weller brand, and saw that their products had consistently good reviews. So, I wound up going to The Home Depot and buying a Weller SP40NKUS Kit. I got it home, put in the narrow, pencil-style tip, and gave it a try. It worked ridiculously well! Apparently my old iron was shoddy, and wasn’t transferring the heat from the core to the tip very well. I got the remaining holes reamed out and ready to go with very little effort.

I got the new filters installed, but the solder wouldn’t join one of the leads with 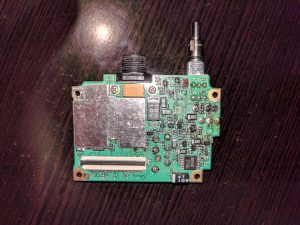 its annular ring. It just kept beading up on the lead. Hoping that it still made enough of a joint to work, I re-assembled the radio just enough to test it. I turned it on, tuned it to a station that I know is always transmitting and would be crystal clear (NOAA Weather Radio, 162.50 MHz), and heard nothing. I used the monitor button to by-pass the squelch. Still nothing. Rather than repairing the radio, I have made it completely deaf. Project status: Failed. 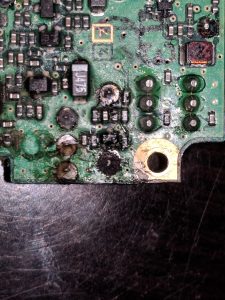 From what I figure, because the tip wasn’t getting heated very well, it probably fluctuated in temperature a lot. As a result, on the hole that I couldn’t get to fuse, it probably got too cool to keep the solder molten, and got fused to the annular ring, without me noticing. So, as I pulled the iron out, it probably took the ring right along with it. Result: a ruined board.

All that money, all that effort, all that waiting around for shipping, and I have nothing to show for it aside from a new, decent-quality iron. This is really depressing to me. At least I didn’t ruin the radio’s transmit functionality. I’ll still be able to use it in conjunction with my old Uniden Bearcat 210XLT to get on the air. Tomorrow, I’ll call up Yaesu and see if it’s even possible to order a replacement of that board for my radio.  If it is, I’ll be saving up for that for quite a while, I imagine.

Want to support my efforts?

I don't have anything set up just yet. If you'd like to support me, please contact me to express interest. Thank you for your consideration!